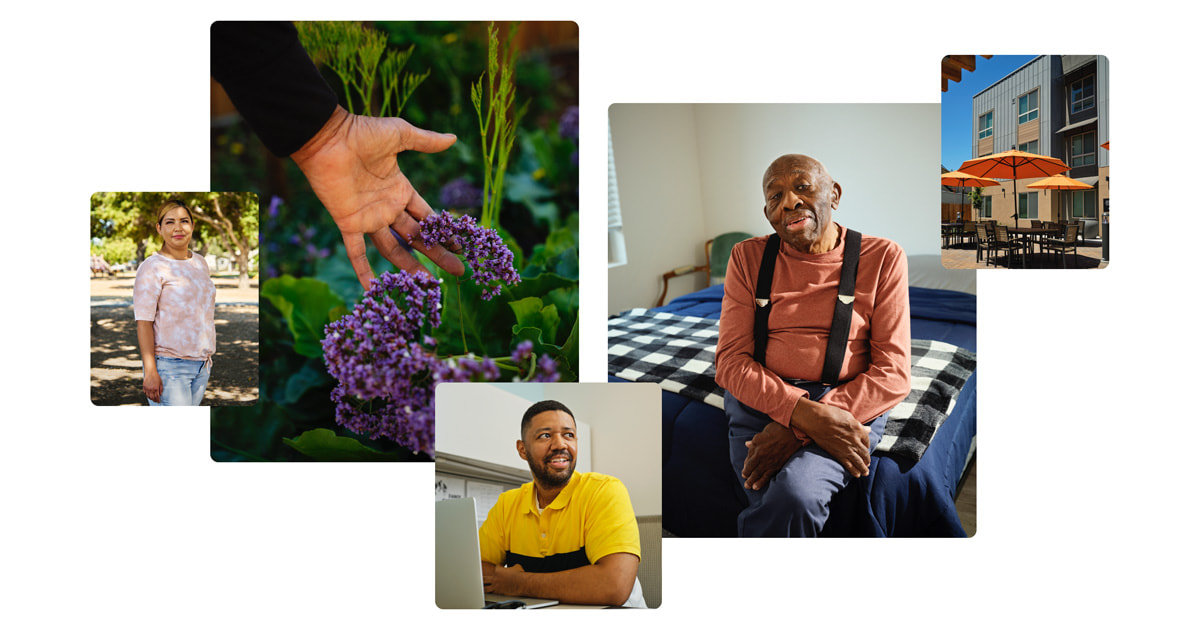 At the recently opened Veterans Square residential complex in Pittsburg, California, a new community is thriving. It’s not uncommon to see residents like JC in the lobby, serenading one of her neighbors with a gospel song, or to find Tonia in the backyard, laying out a new herb garden.

At the center of it all is Marcus Ferdinand, 39, the building services coordinator. But his role is much more than that – he is an advisor and friend to the residents of the complex, ensuring they are cared for and adjust to their new surroundings. For the vast majority, it’s a world away from the streets they’ve recently called home.

Veterans Square is a 30-unit building for veterans and people who have been identified as having the greatest housing need. It was opened in March, with funding from donors including Apple, as part of the company’s $2.5 billion commitment to address California’s housing crisis. Apple has now deployed more than $1.3 billion of that pledge across a wide range of projects in collaboration with the California Housing Finance Authority (CalHFA), Destination: Home, and Housing Trust Silicon Valley.

“We are extremely proud to see families and neighbors move into new homes through our partnership with affordable housing organizations across California,” said Kristina Raspe, Apple vice president for Global Real Estate and Facilities. . “Apple is committed to finding real solutions that can help our communities thrive, and these new projects represent tangible progress toward fulfilling that promise for so many of our fellow Californians.”

In partnership with CalHFA, Apple has provided mortgage and down payment assistance to thousands of low- and middle-income first-time homebuyers, and launched an Investment in Affordable Housing program that has unlocked funds to support nearly 2,000 new units across the state. They include 315 units at Avenue 34 in Los Angeles, nearly 340 units at Redwood Gardens in Berkeley, and more than 230 units for families at Chico’s Cedar Village, including for those affected by the 2018 campfire.

Destination: Home works to end homelessness in Silicon Valley, and Apple’s support has helped the nonprofit expand its homelessness prevention system, which has provided financial and rental assistance to over 20,000 families during the COVID-19 pandemic. Apple support has also helped Destination: Home fund nearly 1,700 supportive and ultra-low-income housing units in the Bay Area, and extend Wi-Fi to several housing communities.

The Veterans Square building was made possible through Apple’s partnership with Silicon Valley Housing Trust, a community development financial institution (CDFI) that provides early stage capital to affordable housing developers. Together, Apple and Housing Trust Silicon Valley have provided funding to support 10 affordable housing projects across the Bay Area, including San Francisco, San Jose, Santa Cruz, Santa Rosa and beyond, with additional projects in the horizon.

At Veterans Square, JC is one of 20 veterans who now call the building home. The 85-year-old spent 20 years in the navy as an aircraft mechanic. More recently, he was living with a family friend, but that arrangement was coming to an end.

“I didn’t know if I was going to get in, so I prayed about it,” JC says. “I love my apartment. They even put me on the first floor because it’s easier with my walker. It meant a lot to me.

JC talks to everyone he sees in the hallways and in the back garden, saving his best jokes and banter for Ferdinand.

“Marcus is a good guy,” JC says. It’s a sentiment shared by many in Veterans Square.

Ferdinand is a veteran himself, having served in the Air Force, and can connect with many residents through this shared experience. After leaving the army, Ferdinand earned his graduate degree in social work.

“I remember growing up in a community where there were a lot of problems,” says Ferdinand. “I never thought that was the way life should be for people. I feel like everyone has the potential to live a life they love – and for some of them us, it’s just harder to get there, and so if I can help anybody get to that point, it’s worth it.

“It’s a brand new building, so it’s an opportunity for me to provide real help from scratch,” he says. “A lot of it is about building community with the residents – introducing them to each other, doing different events, just talking to people and helping them through whatever difficulties they may have with housing. “

This help includes services provided by the Department of Veterans Affairs, as well as sessions with social workers, therapists and financial counsellors.

“Partnerships like this with Apple are vital,” says Ferdinand. “Apart from them, there’s not much for people who don’t have a stable income or access to family resources – it’s heartbreaking. But I’m so happy to be a part of this and to help our residents start over.

Before moving to Veterans Square in March, Tonia, 60, lived in a hotel as part of a program to help people waiting for housing stay off the streets. Now she has a one-bedroom apartment that she has filled with plants and photos of her family.

“This is my home,” she says, looking around proudly. “I have neighbors and we protect each other. I have a friend here who will come with me shopping and help me bring it back. And Marcus is amazing.

Ferdinand helps Tonia with the paperwork to access transportation to take her to her medical appointments and a variety of other services available in the building. She will also start a Bible study group with JC and has a plan for the common space outside the building.

“I’m excited to start my little garden downstairs,” Tonia says as she pulls out packets of seeds. “I have basil, cilantro, chives and parsley – and that’s going to help a lot.”

This belief in a better future for this new community is what drives Ferdinand every day.

“I hope this place can become the home they imagined when they were on the streets,” he says. “A place where they can be happy, where they can feel fulfilled, and where they can have some agency over what’s going on and really enjoy their lives.”

2022-07-25
Previous Post: How to limit the risk of being exposed to fraud
Next Post: XLCS Partners advises CyberGuard Compliance on its sale of assets to Atlantic Street Capital