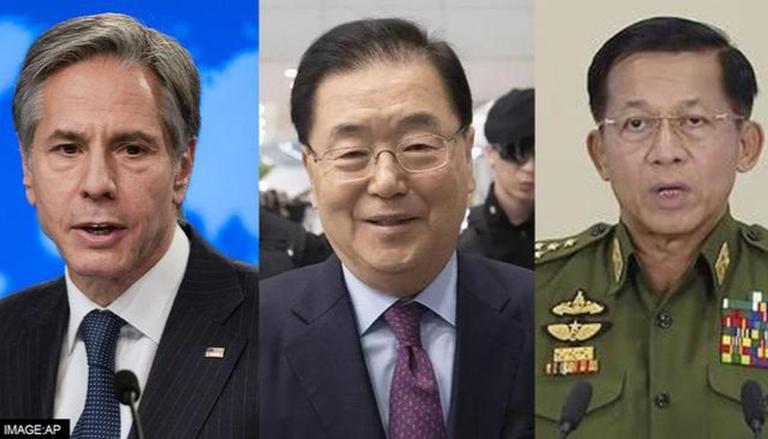 On February 12, U.S. Secretary of State Antony Blinken stressed the importance of international regional cooperation and working with allies and partners to address bloody human rights abuses in the Asian country. Southeast, Myanmar, during a meeting with the Foreign Minister of the Republic of Korea (ROK), Chung Eui-yong. in Honolulu.

Blinken pointed out that the Joe Biden administration has pressed the military junta regime to end violence against pro-democracy forces and civilians, to release all those who have been unjustly detained in the beleaguered nation. Myanmar has been in turmoil since Tatmadaw, Myanmar’s military, carried out an illegal coup on February 1 last year, toppling the then-ruling National League for Democracy (NLD).

Blinken, speaking alongside his Korean counterpart Eui-yong, said the junta’s leaders must allow “unimpeded humanitarian access” to the territory and must restore “Burma’s path to democracy”. The two officials, Secretary Blinken and Foreign Minister Chung, reaffirmed the importance of the U.S.-Korea alliance in addressing some of the most pressing regional challenges, including that of Myanmar, to ensure an Indo -peaceful, safe and prosperous.

The two “affirmed bilateral cooperation in this landmark decade,” US Secretary of State spokesman Ned Price said in a statement later. On the first anniversary of Myanmar’s military coup this year, on February 1, the United States imposed crippling sanctions on at least three senior Myanmar junta officials.

The Office of Foreign Assets Control (OFAC) of the United States Treasury Department announced that it had sanctioned seven people, two of whom were linked to Myanmar’s military junta regime in a joint action with the United Kingdom. (UK) and Canada. Among those targeted were Jonathan Myo Kyaw Thaung, CEO of KT Group and director of KT Group subsidiary KTSL, and Tay Za, owner of “several companies known to provide equipment and services, including weapons, to the ‘Burma Army’.

Today, on the first anniversary of the brutal military coup by the democratically elected government of Burma, OFAC is nominating 7 individuals and 2 entities linked to the Burmese military regime. These designations are part of a joint action.https://t.co/6WFVgrrsHZ

OFAC blamed Myanmar’s military regime for its attempts to consolidate power by sowing terror and launching a crackdown on the pro-democracy movement and the civilian population. “The military regime’s control over resources and complete lack of transparency contribute to significant corruption in the country,” USOFAC said in a statement.