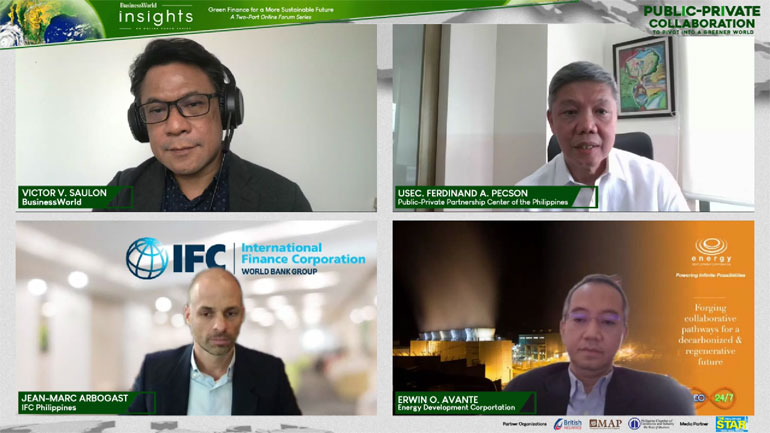 By: Robert A. Drew
In: Partnerships
Tagged: vice president

The climate crisis has been dubbed “the greatest threat to global health and security” of our time. And it will take a monumental collaborative effort between individuals, businesses, governments and societies around the world to fix it.

Green finance could be the key to accomplishing this feat. The World Economic Forum essentially defines it as any structured financial activity – a product or service – that has been created to deliver a better environmental outcome. These are loans, debt mechanisms and investments that are used to encourage the development of green projects, minimize the climate impact of more regular projects, or do a combination of both.

Part two of BusinessWorld Insights’ two-part series on “Green Finance for a More Sustainable Future,” with the theme “Public-Private Collaboration to Pivot to a Greener World,” brought together experts to discuss how whose public and private partnerships facilitated by green finance could pave the way to a more sustainable world.

Ferdinand A. Pecson, Undersecretary and Executive Director of the Philippines Center for Public-Private Partnership, opened the discussion by emphasizing the need for the government to take a holistic approach to adopting new policies to achieve the goals of country sustainability.

“What we need from the government side is a whole-of-government approach; involving political decision-makers who set the rules for ecology and sustainability; project implementers who develop projects according to these rules; and watchdogs and regulators who ensure that private partners in a public-private partnership follow these rules,” he said.

Mr. Pecson said that much remains to be done to facilitate green and sustainable infrastructure in the Philippines. He pointed to the field of solid waste management and the country’s potential to convert waste pollution into renewable energy as an example.

Currently, the Philippines’ potential to develop waste-to-energy technology is hampered by several issues, among them the uncertainty surrounding the resulting combustible product and whether it is classified as renewable energy and would therefore benefit from government-issued incentives.

“Without it being enshrined in law, within a legal framework, it will not be easy to attract investors to invest in projects like this. I understand investors are waiting for more clarity,” he said.

“Some of these rules are still being developed. There are agreements right now that are in place, but they still have a long way to go before they become law. But it’s a pretty exciting time in terms of laying the groundwork for green and sustainable infrastructure. Much remains to be done, and it will require the efforts of several agencies working together,” added Mr. Pecson.

Jean-Marc Arbogast, country director of the International Finance Corporation of the Philippines, agrees, saying the country is “doing quite well” in terms of creating regulatory and policy work to support green infrastructure.

“I think it went pretty well, but there’s still a lot to do, especially on the adaptation side. A lot of infrastructure needs to be built in the coming decades, and this is an opportunity to build it greener and ensure it is sustainable,” he said.

However, he stressed the importance of mainstreaming climate-focused finance through products such as green bonds, as well as specific policies and regulations supporting public-private partnerships to accelerate investments in these areas.

The private sector, he noted, is generally more innovative, efficient and cost-effective than the public sector, which puts it in a unique position to accelerate large-scale green investments.

“We all know that the green transition will be costly. It will be very expensive. Reaching net zero (greenhouse gas emissions) by 2050 will cost an additional $3.5 trillion per year, according to a new McKinsey study, and surely for the Philippines it means an additional $10 billion each year said Mr. Arbogast. .

“And that’s a big part of the country’s GDP. Can the public sector do it alone? No, not in a post-COVID environment. The cost is too high for government to bear alone, so the private sector has a real role to play.

Echoing this sentiment, Erwin O. Avante, senior vice president and chief financial officer of the Energy Development Corporation (EDC), cited the government’s Green Energy Auction Program (GEAP) as an example of a system that can mobilize support from the private sector. sector.

GEAP is a market development support program that aims to provide additional options for renewable energy (RE) developers and producers and to promote competitive pricing for RE supply in the country.

Avante noted that EDC, the Philippines’ leading renewable energy producer and the world’s largest integrated geothermal producer, is very interested in participating in the program and urged the government to create similar initiatives such as GEAP to solve other climate problems.

“The Green Power Program allows consumers with electricity consumption of 100 kilowatts or more to source directly from renewable energy sources. In terms of the market, it’s quite big. In Metro Manila alone, we have approximately 6,000 megawatts of customers who can upgrade to the green power program. It’s quite substantial. I think sooner or later we want it to come down to the retail level, 10 kilowatts for example, so retail consumers can participate in the program,” he said.

About half of the country’s greenhouse gas emissions come from the energy sector, Avante said, stressing the need to accelerate the transition to an efficient, low-carbon or even zero-carbon system.

“It will take a Herculean effort to avert the climate crisis in the future and ease our transition to a greener world. But I believe that the energy sector, of which I am a part, plays an important role. But with the right policies, government enforcement and incentives, support from local and foreign financial institutions for sustainability financing, and technical expertise and investments from the private sector, I believe we can all, in collaboration, achieve a decarbonized and regenerative future. ,” he said.

Spotlight is BusinessWorld’s sponsored section that allows advertisers to amplify their brand and connect with BusinessWorld’s audience by allowing them to post their stories directly to the BusinessWorld website. For more information, send an e-mail to [email protected]

Join us on Viber to get more updates from BusinessWorld: https://bit.ly/3hv6bLA.